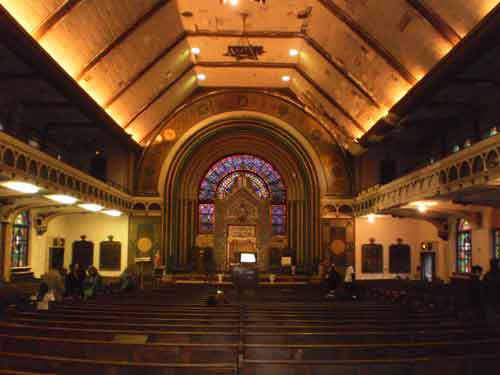 The beautiful, deteriorating, abandoned synagogue on Kenmore Avenue is about to embark on a new life as a secular building.

Agudas Achem North Shore Congregation, built in 1922 by and for wealthy Jews living in the area at the time, was put up for sale in 2012. According to Crain's, it was acquired on April 20th by Cedar Street for $1.25 million. In the Crain's article, Cedar Street's managing partner, Alex Samoylovich, says that the building will be used for residential purposes and a plan will be developed for it in the next three to six months.

The building is magnificent and decrepit, soul-stirring and sad. During Open House Chicago a few years ago, rain water trickled down the oversized marble staircases leading to the second floor. The grandeur of the 30-foot-tall glass mosaic Holy Ark was diminished by the carpet of pigeon droppings a few feet away. The signature vaulted ceiling had peeling paint and holes through which you could see the sky.

What happened to this once-inspiring house of worship? A few things. For one, the neighborhood changed. Its moneyed congregants moved away and were replaced by less-wealthy Russian immigrants. There was a schism in the hierarchy of the synagogue, with the rabbi and board members on opposite sides of several courtrooms. The building was defaced, vandalized, and broken into more than once.

This news of its sale is heart-breaking for many who attended the synagogue or grew up nearby, but things could be much worse: Crain's mentioned it was a teardown candidate and the 2012 real estate listing said, "Potential for condo conversion or new construction." Cedar Street has a track record in rehabbing distressed historical buildings. We look forward to seeing what it has in mind for the next act of this property.