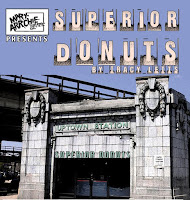 A prime-time comedy series based on Uptown still might happen.

This winter CBS filmed a pilot based on Superior Donuts, playwright Tracy Letts' homage to the changing dynamics and power of friendship in our part of town. The networks are currently announcing what pilots have been picked up to be turned into TV series in the fall and mid-season. According to one website:


On the comedy side, I hear CBS is considering the multi-camera ensemble Superior Donuts, with the network brass particularly high on its star Jermaine Fowler.