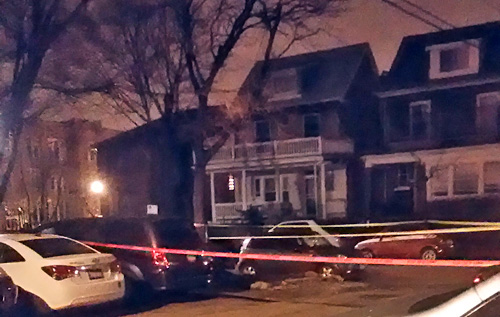 Last night readers reported hearing shots fired near Winthrop & Winona at 11:30pm, with the police scanner reporting that a man had been shot in the leg and shoulder. This morning the news broke that the man had died.

But this isn't the all-too-common Uptown gang-versus-gang nonsense. According to eyewitnesses and news reports this morning, it was an attempted robbery in which the victims handed over their wallets and phones, but balked when the robber tried to take the car from which they were unloading furniture. One of the would-be victims had a gun and used it.


"At 11 25PM March 31st... I pulled into my parking spot. My neighbor and his friend were unloading a nightstand from his car and carrying it inside his place. I asked if they needed help. They said no, so I went inside and sat down to look at some mail.

Long story short... My neighbor has a gun and a conceal and carry permit/license. It turns out he was robbed... I heard on my police scanner app... He was robbed by a known gang member. He shot the man in the back right shoulder... The man's condition was serious...

Here are pics of the scene at 230 am April 1. The location is Winona near Winthrop."

According to the Sun-Times, "The 28-year-old was taken Advocate Illinois Masonic Medical Center, where he later died. The Cook County medical examiner’s office withheld his name Friday morning pending notification of his family. Police said he had been on parole for a past armed robbery conviction."

UU Note: The news outlets are all saying that this happened around 10:30pm. However, the readers who contacted us all reported it happening at 11:30pm. We're going with our readers on the timing.

Update: Ald. Osterman updated in his weekly newsletter:  "Last night our community was affected by the violence rippling through the city. Around 10:30 pm, a 28-year-old man with a criminal background attempted an armed robbery of a local resident at the intersection of Winona and Winthrop. In the course of the robbery, the resident defended himself, shooting the man, who died later at Advocate Illinois Masonic Medical Center. The police are reviewing surveillance video and fully investigating this shooting death. I will have more information about the incident next week. If you have any information about this case, please contact Area North Detectives at 312-744-5277 or Marko Zaric in my office at Marko@48thward.org or 773-784-5277."

Update: The would-be robber has been identified as William George, and the Sun-Times confirms that no charges will be brought against the citizen who shot him.
By Kate Uptown - April 01, 2016