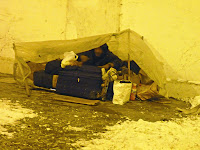 The City of Chicago released a statement today about its plans to help the chronic homeless, including those living under the Lake Shore Drive viaducts, find housing and services.

Some excerpts from the press release:

Mayor Rahm Emanuel today announced the launch of a citywide task force dedicated to addressing and reducing homelessness in Chicago. The Task Force to Reduce Homelessness will focus on improved coordination between city and sister departments, increased efficiencies in service delivery, and identifying additional resources to devote to these efforts. Lisa Morrison Butler, Commissioner of the Department of Family and Support Services (DFSS), will serve as chair of the task force.

The Task Force will focus on four broad priorities.
"I am pleased that Mayor Emanuel has directed necessary resources that include this task force to address the needs of individuals and families experiencing chronic homelessness," said 46th Ward Alderman James Cappleman. "My number one goal for our homeless population is to provide them with greater access to permanent housing with wrap-around services, and I look toward this task force to create a plan of action that will make this happen."

Here is the entire press release on the City's website.
By Kate Uptown - March 31, 2016