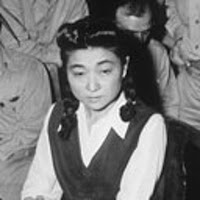 In December 1941, a young Californian named Iva Toguri was visiting Tokyo, helping to care for a sick aunt. After December 7th, when the Japanese bombed Pearl Harbor, she was branded an enemy alien by the Japanese government because she refused to renounce her American citizenship. She was not allowed to leave the country.

Meanwhile, back home in California, the U.S. government placed her family in an internment camp because of their Japanese heritage. Her mother passed away there.

While Iva worked for Radio Tokyo as a typist, the station put her on the air as "Orphan Ann" in hopes that hearing broadcasts with an American accent would help demoralize American troops by making them homesick. Ms. Toguri and about a dozen other female broadcasters were collectively referred to as "Tokyo Rose" by the American GIs.

After the war, she was imprisoned by the occupying American forces for a year on suspicious of aiding and abetting the enemy, but no charges were brought. In 1948, still unable to return to the U.S., she was rearrested and put on trial for treason stemming from alleged statements she made during her radio broadcasts.

She was sentenced to ten years in prison, of which she served six. Later, the primary witnesses in the trial revealed that they were coerced by the FBI into making false statements against her.

After Ms. Toguri was released from the West Virginia prison where she served her sentence, she joined her father, Jun, in Chicago, where he had opened a Japanese gift shop. She settled into a three-flat at 1443 West Winnemac, where she kept to herself and where she lived the rest of her life.

For years, she ran J. Toguri Mercantile Company, first located at 1118 North Clark, and later at 851 West Belmont. Many people remember the small serious woman behind the counter who waited on them. After 65 years in business, J. Toguri closed its doors in 2013. Lakeview Smiles dentistry office is there now.

The Toguri family did well in Chicago, providing financial and business advice for other entrepreneurs. Iva provided the seed money and mentorship for Yoshi Katsamura in 1982; Yoshi's Cafe on Halsted is the result. She owned the building that housed Ann Sather on Belmont when Tom Tunney first took over the restaurant and offered him a five-year lease only after satisfying herself that he could make the rent payments.

In 1976, the Chicago Tribune and 60 Minutes did investigations into the case against her and found evidence of perjury and overzealous prosecution. On the last day of his term in office in 1977, President Gerald Ford granted Iva Toguri a full and unconditional pardon, and her American citizenship was restored to her.

She passed away in 2006 at age 90, and is buried at Montrose Cemetery at 5400 North Pulaski. An improbable and sad life journey for a California girl who graduated from UCLA with a degree in zoology and aspired to a career in medicine.

According to Tom Tunney in her obituary in the Tribune, "She was never bitter. Considering her life, she was very optimistic."
By Kate Uptown - January 14, 2016