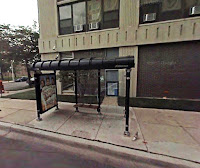 We got several reports of shots being fired Sunday afternoon (1:16pm) at Wilson and Clarendon, the site of several previous gang-related shootings, the most recent last November. From what we've been told by several readers, this is what happened:


"A [dark blue sedan, with three men inside] traveling East on Wilson fired 2 shots at a gang-banger standing at the bus stop on the SouthWest corner. The intended target was not hit. The bus stop itself wasn’t so lucky. It took the bullets and glass shattered everywhere.

The target took off running with gun in hand, trying to chase down the drive-by car as it continued East on Wilson before turning onto Marine Drive.

When he realized a police SUV was chasing him, he changed direction and started running South on Clarendon. An officer heard the shots from where she was, nearby, and got there in time to see the intended target chasing the car that shot at him.

Fortunately, the police caught him and found the gun which he tossed into a parked mini-van that apparently was unlocked. This was the second recent shooting at this bus stop!"

There's been a lot of gang idiocy here lately, mostly centered on Wilson. We're not sure what perceived slight these individuals have their feelings hurt over, but daylight shootings on arterial streets are the last thing this community needs. The bus shelter that got shot up is heavily used. In the Google Streetview scenes we took it from, it was occupied by people waiting for the bus in nearly every instance over the years. We shudder to think what may have happened if someone was sitting in it Sunday afternoon.

If you know anything, if you see anything, if you hear anything -- call 9-1-1. Don't worry you're "bothering" the police, or take the time to post on social media asking for confirmation of what you think just happened. The cops were on the scene immediately after this incident, and thanks to callers, they know the vehicle that fired the initial shots. (Plus, communities with the highest number of 9-1-1 calls get the most police resources.)

Go to CAPS if you have any information, and if you aren't comfortable speaking publicly, wait until after the meeting and pull one of the officers aside. The next CAPS meeting for the Clarendon Park area is Wednesday, February 10th, at 7pm, at the Clarendon Park Fieldhouse, Sunnyside & Clarendon.
By Kate Uptown - January 25, 2016