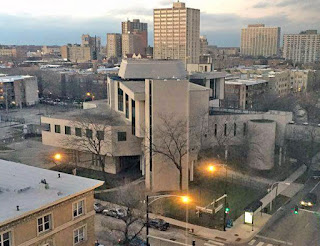 Nearly eight years after the religious order that owns the 3.5-acre Columbus-Maryville site put it on the market...

Nearly seven years after Sedgwick Properties Development Group signed a contract to purchase it and build a mixed-use high-rise there...

And more than five years after then-alderman Helen Shiller created the Montrose/Clarendon TIF to enable Sedgwick to build there with $60million in assistance...

... it looks like Maryville is finally on the way to being developed.


"Last night, the 46th Ward Zoning & Development Committee, made up of 40 diverse neighborhood and chamber organizations throughout the ward, voted to support the Clarendon/Montrose development proposal, which is the former site of the Maryville Academy. Each organization sends its own representative to serve on the committee. Click here to find out how your representative voted.

This development is within a Tax Incremental Finance (TIF) district that makes up property owned by the Missionary Sisters of the Sacred Heart of Jesus and Park District land. Currently the TIF has no money because neither entity pays taxes. The only way TIF funds are generated at this site is to have a development on this site generate tax revenue. Therefore,  I am requiring that JDL Development provide $4.6 million upfront to assist with the Clarendon Park Community Center.

For the past few months, I have met with the Cubs about the potential for a partnership with the Park District to create a Cubs indoor baseball academy at Clarendon Park for neighborhood kids that would also rehab the Community Center.

JDL Development will be contributing $5.7 million to the Chicago Low Income Housing Trust Fund, money that will go to pay for rent subsidies to people earning 30% or less of the area median income. Currently, the 46th Ward receives more rental subsidy assistance from this fund than the combined total given to 29 other wards in the City of Chicago.

Click here to view the development proposal. Groundbreaking is expected sometime in the spring of 2016."

Our post with information about the latest proposal is here.  Ald. Cappleman's email newsletter is here.

It's been a long trip getting to this point. Sedgwick originally proposed a three-tower development that would have included "1,050 residential units, a hotel, a supermarket, a health club, and parking for 1,100 cars." It was called Lake View Station, odd considering that Clarendon Park is squarely and indisputably in Uptown.

There were meetings held in laundry rooms, many new versions of potential developments, a name change to The Lighthouse at Montrose Harbor, the abandonment of Sedgwick as most favored developer by the then-alderman, accusations of renderings that didn't match the blueprints, more community meetings, a new developer, an attempt to have the building landmarked, a reduction of the TIF amount, and more.

But now, it looks like development at Maryville may finally happen. We see it as a win for Uptown in many ways:

Given the long and bumpy road to get to this point, we can't say with any certainty that this plan is locked in. But it is -- by far -- the closest the Maryville property has come to redevelopment since we've been following the story, for almost eight years now. Time will tell. And we're humming a little Etta James.
By Kate Uptown - December 01, 2015