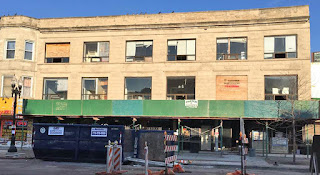 Thank you to reader BR, who noticed that 4635-4641 North Broadway has scaffolding up and a dumpster in front, so presumably construction is beginning on the rehab of the building's residential and retail spaces. This takes place more than two years after Mike Krueger of Lakepointe Properties presented his plan for the building. Lakepointe is the developer of the building at Broadway and Clifton where 42 grams and Spoil Me Salon and Spa are located, and recently began work rehabbing the residential floors of the Bank of America building at Lawrence and Broadway.

This building has had a sad recent history. It was owned by a notorious slumlord until 2012, when it went into foreclosure. During that time, the City placed it on the Drug & Gang Building list and it was in Housing Court. In 2011, it was the site of an armed fugitive barricade situation that brought the SWAT team out and necessitated the closure of the Red Line. Let's hope this rehab brings happier days to the 1905 building. We are eager to see what happens.
By Kate Uptown - November 25, 2015