Stewart School Goes On The Block This Week 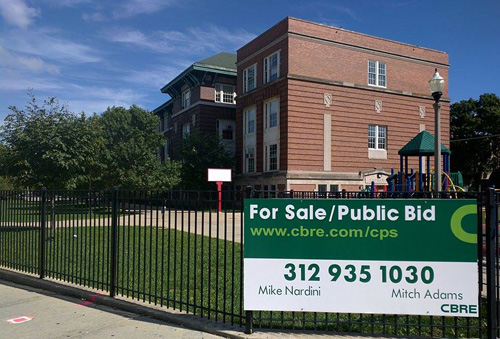 Ever wanted to own an old school?  The City of Chicago is accepting bids on the former Stewart School and its grounds beginning Wednesday, September 23rd.

Now, there are a few strings attached:
There were hopes that Chicago Public School Decatur Classical would move into the building, but according to Ald. Cappleman, the costs of bringing another CPS school in were prohibitive. Here's why: CPS requires extensive changes be made to the building, which dates back to 1905.

Bringing the building up to CPS's rigorous code requirements would have cost between $12 million and $15 million. (This is consistent with CPS's 2013 estimate that it would cost $16,500,000 to update the building.) The required improvements would have included adding another elevator to meet ADA guidelines, and installing air conditioning throughout the building, as well as other costs involved in bringing a 110-year-old building up to 21st century standards.

CPS is cash-strapped and is already cutting back on the money allotted to other Uptown public elementary schools, McCutcheon in particular. Finding another $12-$15 million to bring Stewart up to the level CPS requires would require someone with very deep pockets indeed. Considering that CPS, the city, and the state are all operating in the red, it's just not going to happen. (If you happen to have that kind of money tucked away or can figure out a scheme to get it, we're sure Decatur and CPS would love to hear from you.)

Selling the school and its grounds would add money to CPS's coffers, rather than create a multi-million-dollar expense. So the City of Chicago, as legal Title Holder of Record, will attempt to sell the property through a public bid process.

Chicago Waldorf School, a private school, expressed an interest in buying the Stewart campus, since they've outgrown their current Rogers Park location. Being a non-CPS school, they don't have the same stringent requirements for the building that CPS does.

Waldorf submitted a bid to to purchase Trumbull School in Edgewater, but Svigos Development outbid them and will transform Trumbull into apartments and market-rate condos, with TimeLine Theatre taking over the first floor. We wonder if Waldorf will have a renewed interest in the Stewart campus now that Decatur Classical is out of the running?

(One thing we find curious: It was widely publicized that Svigos' bid was accepted, but we can't find anything saying how much they offered. We'd love to know how much aging schools go for.)

So, stay tuned. It will be entertaining to see how many bidders are interested in the former Stewart School. Grab the popcorn and settle in. The fun all starts on Wednesday.
By Kate Uptown - September 21, 2015