Do You Know This Bank Robber? (Updated: Caught!) 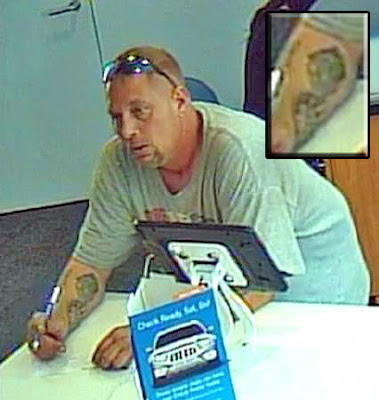 If you can help get him captured, there's a reward in it for you.

The FBI says he robbed the PNC Bank at Montrose and Broadway this morning shortly before 11am.

He's white, approximately 6' tall and weighs about 200 pounds. Witnesses say he has blond hair, but that's debatable in this photo. He was wearing a grey t-shirt and has a rather distinctive tattoos. We've highlighted the one on his right forearm.

He didn't use a gun, and the FBI is offering a reward.

Update:  According to the FBI website and Crime In Wrigleyville & Boystown, he's been apprehended.  No details. We hope someone will collect a reward.
By Kate Uptown - August 19, 2015