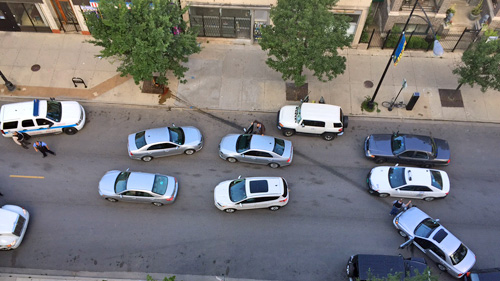 We're not exactly sure what happened this morning on Sheridan.  As of 9:10am, Sheridan was still closed and the officers were still interviewing bystanders and witnesses.

A reader says, "Looks like an officer was injured in a confrontation at 5000 N Sheridan this morning, around 8am. Not entirely sure what happens; you can see blood near the tree that the car on the bottom right hit. Cops arrested the driver of the car (he's already been put in a vehicle). Officer was limping, Sheridan is currently closed.  Things have been getting a little crazy up here on Argyle!"

Both the individual driving the car and the officer were taken from the scene shortly after the photo was taken.

We don't have any further details on this, but will update if Ald. Osterman or CPD releases a statement.

In other news, last night shots were fired in front of 850 West Eastwood, possibly by kids on bikes. No one was injured, but witnesses say that the police tell them that the target was someone standing in front of the building at that location. Seems like the gangs are playing their games again, games with no logic behind them except to rack up a body count. Be sure to call 911 if you have any information or if you see anything suspicious.

Update:  ABC7 is saying that a person of interest in the recent Lincoln Park sexual assaults was arrested in Uptown this morning during rush hour after a traffic accident.  No confirmation, but we're wondering if this might be the reason for the massive police response to this incident on Sheridan.

Update:  More on the story here.  The person arrested has been identified by witnesses as a suspected serial rapist, and the police were in the process of arresting him when he decided he didn't want to be arrested.  That's what led to the described scene.
By Kate Uptown - August 21, 2015