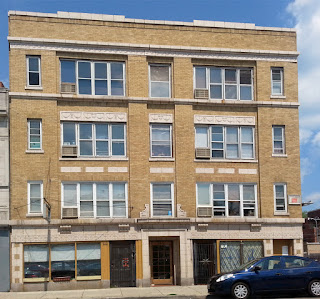 Seems like the ripple effect is real.  With two major properties on the same block selling this year, the market is hot for other properties on Montrose.  After the sale of Pensacola Place (between Sheridan and Hazel), and the empty Dearborn Wholesale Grocers across the street set to become retail, 944 West Montrose, immediately west of the Dearborn Wholesale parking lot, has sold for $1.95million.

It's a 1929 building that doesn't look like it's had much TLC since it was last purchased in 1987 for $110,000. According to real estate records, it consists of 27 studio apartments and two retail areas. One of the storefronts appears empty and was last occupied by a driving school. The other was or is the home of the Polish Yachting Association of North America.

The article announcing the sale of the building in REJournals doesn't identify the new owner of the property.  It does say, "The rents were far below market. The new buyers saw this has a 'value-add' opportunity and are planning to rehab the apartments while upgrading the common areas."
By Kate Uptown - August 17, 2015