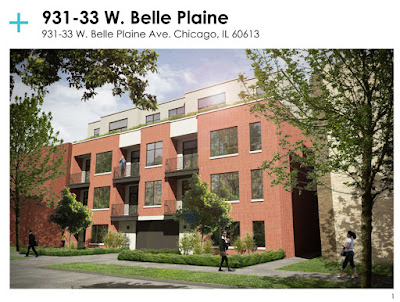 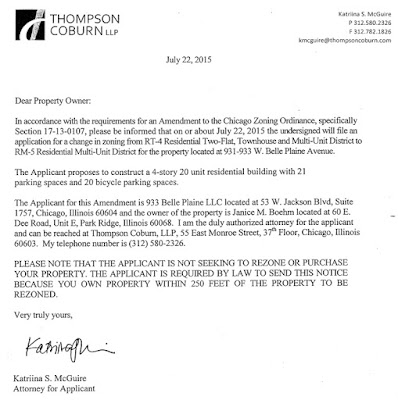 Neighbors living near 931-933 West Belle Plaine recently received mailed notices that a zoning change is being proposed, one that will enable the conversion of an existing 40-space parking lot into a 20-unit four-story residential rental building with 21 parking spaces.  You can see the renderings here and the developer's application here.

According to the 46th Ward's website, the proposed zoning change was accepted at a June 1st Buena Park Neighbors meeting.  We've heard from several neighbors of the parking lot who just found out about the proposed development when they received the July 22nd letter.

If you're trying to visualize the location of the parking lot/proposed new building, it's a half block west of the intersection where The Shift, Michael's Pizza, and GNS Foods are located. At that point, Belle Plaine is a narrow residential block that runs between Broadway and Sheridan.
By Kate Uptown - July 29, 2015