It's Official! Ross Dress For Less Coming To Montrose Avenue 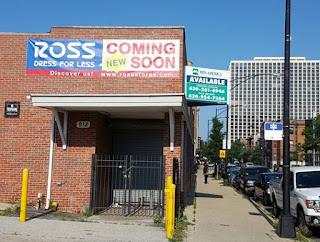 In April, Uptown Update posted the news that Mid-America Real Estate Group's website was featuring a listing for the former Dearborn Wholesale site at 918 Montrose, with renderings showing that Ross Dress For Less would be the anchor tenant.  Shortly after we posted about it, we were told that the deal with Ross had not yet been finalized, despite the diagrams on the website.

An observant reader (thanks, JD!) sent in this photo today, which confirms that Ross is indeed coming to Montrose.  The flyer and specs are no longer on Mid-America's website, but as of last April there was still one retail space with 4,800 square feet available at the site. So even if Ross Dress for Less isn't your cuppa tea, there's still room for another retailer that might be.

With Pensacola Place right across the street recently selling for $66 million, it seems Montrose is experiencing a heyday.  Good to see so many companies investing big money in Uptown.
By Kate Uptown - July 25, 2015