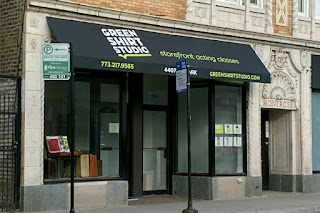 Green Shirt Studio, an acting and performance training center located at 4407 N Clark, is thrilled to announce two new initiatives designed to open the school up to the public – free workshops every Friday, as well as the addition of four on-going yoga classes every week. Both new programs begin August 1.

Free Fridays will include a community yoga class at 2pm, a repetition workshop (part of the Meisner technique for actors) at 7pm, and a rotating workshop that will focus on an element of acting or performance technique at 8pm. All Free Friday events are first-come, first-served and donations are accepted.

To kick off the Free Fridays events, Green Shirt will be hosting a launch party on August 7 at 8pm. Guests will have the chance to meet many of Green Shirt Studio’s instructors, network with other actors, and enjoy free food, drinks and more.

The schedule for the August Free Fridays is as follows:
In addition to the Free Fridays, Green Shirt is also offering four new ongoing yoga classes. Yoga classes will be held on Mondays and Wednesdays at 10am, Fridays at 2pm (part of Free Fridays), and Sundays at 7pm. All classes are one hour and cost $10.  The yoga schedule is as follows:
Green Shirt Studio is run by husband-and-wife acting teachers Andrew Gallant and Sommer Austin. They opened their first studio space in the Uptown neighborhood in September 2014. For more information on Green Shirt Studio, please call 773-217-9565 or visit www.greenshirtstudio.com.
By Kate Uptown - July 28, 2015