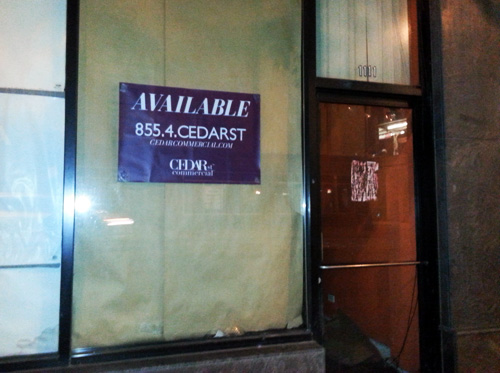 Well, that didn't take long. Just a couple weeks after buying the retail space and adjacent parking lot across from the Aragon, Cedar Street Commercial is marketing the storefronts for tenants.  According to the listing on its website, retail spaces ranging in size from 1700-5200sf are available in the building at 1101 West Lawrence, as well as the large parking lot located at 4750 North Winthrop.

The building is the former site of the Kinetic Playground nightclub, which closed in 2011 after the legal and financial problems of owner Jimmy Gouskos came to light.  The building was turned over to a receiver in 2012, and was marketed for sale in December 2014.  Cedar Street's acquisition was announced on June 25, 2015.

The second and third floors of the building are individually owned condominiums, which remain unaffected by the sale.  The anchor -- and only current -- tenant is Chase Bank, in the corner storefront at Lawrence and Winthrop.

We remember the Kinetic Playground as a lively spot both post- and pre-concerts during its short lifespan.  We hope to see a new tenant give Aragon concertgoers a place to hang out again during their trip to Uptown.
By Kate Uptown - July 13, 2015