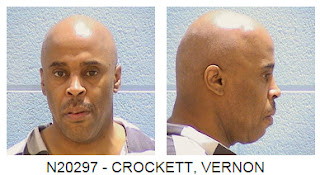 His name is Vernon Crockett, but he's better known to cops, attorneys, and victims as Kevin Peters.  Now he's known as a resident of Stateville Correctional Center.

Earlier this month, Mr. Crockett was found guilty of four residential burglaries in Uptown in mid-2013, at which time he was arrested.  He's been in custody ever since.  Video footage and DNA evidence combined to help convict him.

He was sentenced to 16 years, of which he must serve at least eight years.  His earliest parole date will be in June of 2021.

Mr. Crockett's been in the sticky-fingers game a long time.  At his current age of 51, he has a rap sheet going back to 1981, which lists 19 felonies, all involving taking things that don't belong to him and entering places he shouldn't. He's served time for home invasion, robbery, burglary, attempted residential burglary, and residential burglary.  The latest four counts involve apartments at Leland and Broadway.  The 16-year sentence he just received is the longest one he's been given.

People with nice things will have a hiatus from Mr. Crockett for the remainder of the decade.
By Kate Uptown - July 28, 2015