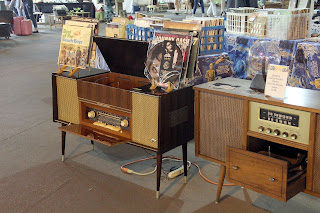 "June 21st, Uptown, is the Father's Day edition of the Vintage Garage.  If your Dad is cool, he'll want to come hang out with us and replace the records Grandma sold at her yard sale or that special album, destroyed at the party you had in 1985.

June is our Record Ramp show.  Besides the usual great merchandise seen across the spectrum of vintage  our dealers bring out the vinyl, stereo and musical gear they have been hoarding for this show.  If Dads been thinking about getting the band back together, make him drive.

In its 4th seasonm the Vintage Garage is Chicago's only all vintage market and draws vintage lovers from all over Chicago and beyond.  With 100 vendors specializing in all things vintage, it's awesome and not your typical BBQ.