Ka-Ching! Riviera Building Sells For Big Bucks (A Lot of #TBT Too) 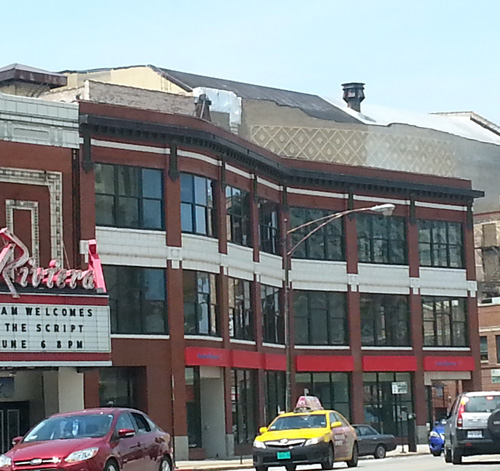 We think the building at the southwest corner of Broadway and Lawrence, where Bank of America is located, is a fabulous and handsome restoration. In fact, someone liked 4752-4760 Broadway so much that they just paid $2.85 million for it.  According to Real Estate Journal, it just sold to Lake Pointe Apartments & Development Group, LLC.  The seller was an unnamed private investment firm.

We're very interested in seeing what the new owners do with it, particularly the second and third floors, which have been empty since its 2007-08 restoration.

Update: According to DNAinfo, the new owner is Mike Krueger, and the second and third floors will be converted to soft lofts.  Mr. Krueger is the owner of the rehabbed building at Leland and Broadway, which houses 42 grams and Spoil Me Salon on the ground level and market-rate rental apartments above.  He also owns 4635-41 North Broadway, and had sought approval to add a level and upgrade the interior.  However, that was in autumn of 2013 and nothing has been done to the building since, so we're not sure what's his plans are for that property.

Because it's Throwback Thursday, this is what the building looked like before the restoration. Brace yourselves!

Yuck!  Apparently when the exterior started to deteriorate, the easy fix was to slap on some metal panels to hide the damage.  Until 2007, this was how the building looked.  Uptown Update began publishing in May 2007, and the bloggers at the time took a keen interest in the progress being made, with extensive posts and photos.

First the horrible tan panels were removed, leaving just the framework in place.  In fact, one of the posts on the very first day of the blog's existence recorded that moment:
We can't wait to see what is next for this beautifully restored gem, as the new owners take over. Please, some second and third floor tenants?
By Kate Uptown - June 04, 2015