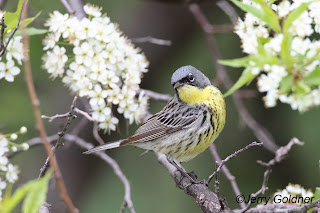 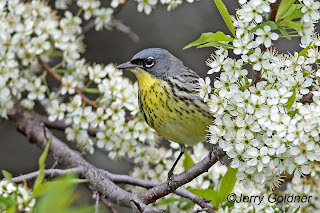 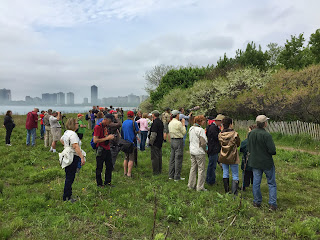 Our favorite wildlife photographer, Jerry Goldner, sent these photos of a rare bird sighting at Montrose Harbor last weekend.  The Kirtland Warbler drew crowds of spectators, some coming from out of state just for a chance to glimpse it.  (Jerry's Profiles of Nature Flickr page shows more photos.)  He writes:

"Kirtland's Warbler is an Endangered species and is on the 2014 State of the Birds Watch List, which lists species most in danger of extinction without significant conservation action. Fire suppression led to decline in suitable habitat for nesting. Nest parasitism by Brown-headed Cowbird caused further decline in species. Extensive measures currently taken to provide adequate nesting habitat and to control cowbird numbers.

The endangered Kirtland's warbler is one of the rarest members of the wood warbler (Parulidae) family. It is a bird of unusual interest for many reasons. It nests in just a few counties in Michigan's northern Lower and Upper peninsulas, in Wisconsin and the province of Ontario and, currently, nowhere else on Earth."

According to the Tribune, it was not seen again last Monday after a star turn over the weekend, and is presumed to have moved on.
By Kate Uptown - May 25, 2015