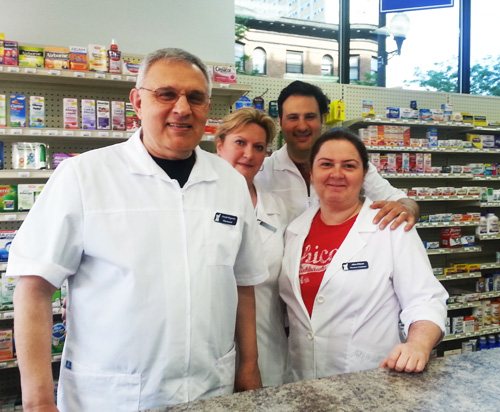 Welcome a long-time neighbor to a new location:  Lawrence House Pharmacy has moved from 1026 West Lawrence (at Kenmore) to a sparkling new corner space in the ICA GreenRise building, at 4750 North Sheridan.

There's a lot to like about the move.  No more scaffolding blocking the windows, like it did way too often at Lawrence House. No more dark film obscuring the windows of the ICA Building. [More about the new windows below.]  The best part is, a well-liked family-owned business is remaining in the community to serve its clientèle. 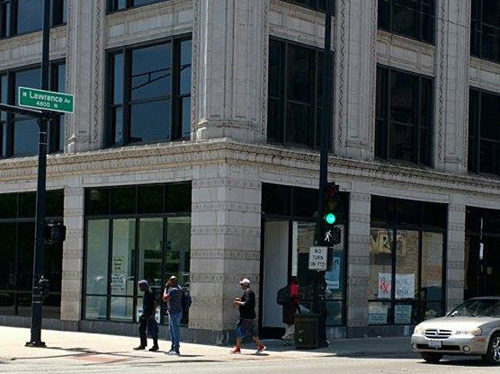 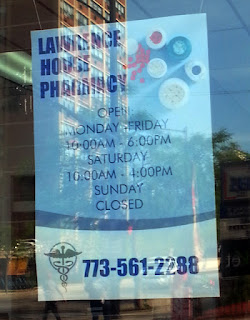 The pharmacy just opened at its new location on Tuesday. Its owner, Joseph Rogowin, said they had hoped to open earlier, but that old bugaboo, Chicago red tape, held them up.  But they're open for business now.  Signage and awnings are on order that should make the store more noticeable and attractive.

Mr. Rogowin opened Lawrence House Pharmacy nearly 30 years ago.  Prior to that, he worked at the Sheridan/Wilson Pharmacy from 1980 to 1986, which was located where McDonald's is now. He's been around Uptown a long time -- long enough to remember when the Peter Pan restaurant was where Demera is now; long enough to have worked as a teenager at Goldblatt's (now best known as the former Borders); and long enough to have attended social events at the Somerset Hotel when it was in its heyday. 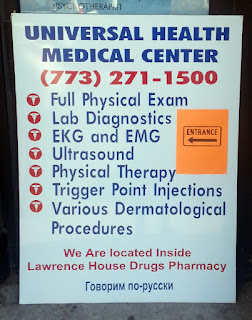 Lawrence House Pharmacy occupies the front of the corner storefront, and Universal Health Medical Center, which also made the move across the street, is in an adjoining storefront, accessible through the pharmacy.  Both the pharmacy and medical center were serving a steady stream of customers while we were there, both testaments to how much they are needed in the community and to the loyalty of their clientèle.

The staff is pleasant and friendly, and uniquely suited for Uptown. While we were there, we heard several conversations between them and customers in languages other than English, including Russian.

We're glad to see a long-empty space filled. The only former tenant Mr. Rogowin could remember at this corner was a long-defunct dance studio (the students would come into the pharmacy before class to buy gaffers tape for the soles of their shoes). In the series of 1930s photos that UU has run in the past, we looked to see what was at the location way back when, and it was ... a pharmacy! A Walgreen's, to be exact.  It's nice to see Lawrence House Pharmacy continue that tradition.

Update: Uptown United says, "Congratulations to Lawrence House Drugs and The Institute of Cultural Affairs USA! The ICA applied for and received Curb Appeal Rebate funds available through SSA#34 to replace the dark windows and redo the facade. We can't wait to see the awnings installed. More info on the Curb Appeal Grant Program here."  There are funds available for 2015.
By Kate Uptown - May 29, 2015