As we get ready to go into June, Sunday's going to be another day with inhospitable March weather. Here's a suggestion:  Go to the Music Box at noon and see a tribute to Robert Ryan, an Uptown native who Martin Scorsese described as “one of the greatest actors in the history of American film.”  It runs at noon.

"Join us for a special screening of Ryan’s tense boxing drama The Set-Up and a post-screening discussion of his life and career, featuring Matthew Hoffman of Park Ridge Classic Film; Lisa Ryan, the actor’s daughter; and J.R. Jones, film editor for the Chicago Reader and author of the new biography The Lives of Robert Ryan.  Tickets are $10. A ticket and a copy of the new book The Lives of Robert Ryan are $38 (a $2 discount). Additional books will be available for sale at the Music Box." 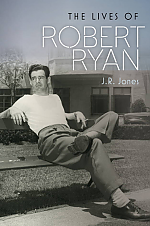 Uptown Update took at look at Robert Ryan's early life in Uptown. Read more about him here, including a letter her wrote to his children about his life growing up in WWI-era Uptown, both on Kenmore and Winona.
By Kate Uptown - May 31, 2015