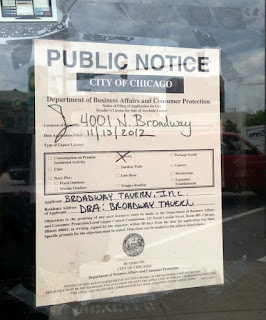 All we can say is, thank goodness for Uptown's activist community.

Early this morning. there was a double murder at The Dolphin nightclub in Bucktown, formerly known as Green Dolphin Street.  It's owned and managed by members of the Menetti family, well known in Uptown for their shameful ownership and management of Lawrence House and other derelict properties.

A fight that started inside The Dolphin spilled outside onto the street, where shots rang out, killing two men and injuring another. Ald. Scott Waguespak says the club has had stabbings, shootings, and fights on the dance floor. At one point, the club was closed down, but allowed to reopen.  Bad management led to the deaths of two men today.

Could this have happened in Uptown?  If the Menetti family had gotten its way, it well could have.  In late 2012, a group called Broadway Tavern Inc. applied for a license to open a tavern at Irving Park and Broadway.  A little poking through the public records revealed that the Menetti family were the applicants.

Based on the conditions into which Lawrence House had deteriorated, and the criminal activities documented at Green Dolphin Street, the block club (Buena Park Neighbors), Ald. Cappleman, Rep. Greg Harris, the Liquor Control Commissioner and many concerned neighbors all opposed granting a license to Broadway Tavern.  The Menetti family appealed the denial several times, but ultimately the license was denied.  It took a great number of people a lot of time and effort to ensure another Menetti-managed entity didn't become part of our community.

It looks as if the city will now do its best to close down The Dolphin Club.  What a shame that people had to die for it to happen.
By Kate Uptown - March 16, 2015