Storefronts Across From The Aragon Now Bank-Owned, For Sale 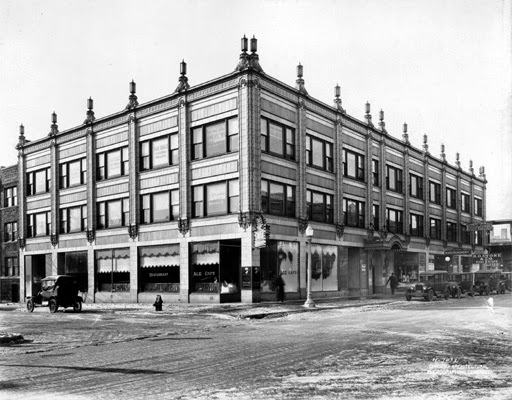 The storefronts at 1101-1113 W Lawrence, in the building across the street from the Aragon, are now bank-owned and are being marketed for sale, as is the parking lot behind the building.  The condominiums located above the storefronts remain unaffected and are individually owned.

Now empty except for anchor tenant Chase Bank, the storefronts and the parking lot are in a great location and we hope someone takes advantage.  The listing with Sperry Van Ness Commercial Real Estate can be seen here.

The building dates back to 1917, seen above in better days (for the building, not for the condition of the streets).  By the 1980s, it was dilapidated and home to Sharon's Hillbilly Heaven bar; a liquor store that opened at 7am; and Prologue School.  The building was purchased by James Gouskos and rehabbed in the early 2000s. Mr. Gouskos eventually opened the Kinetic Playground nightclub at 1113 W Lawrence.

But legal and criminal charges filed against Mr. Gouskos led to the closure of the nightclub around 2011, and the storefronts went under the management of a receiver in 2012. It's a very long and complicated story that ended up on the front page of the Sun-Times; you can read more about it here.  Let's just say that an awful lot of people lost their life savings to promises made in a tale that involves organized crime, bad loans made by Alexi Giannoulias' family bank, video poker and a gambling addiction. We hope the fortunes of the building take a new turn with a new owner.
By Kate Uptown - December 16, 2014