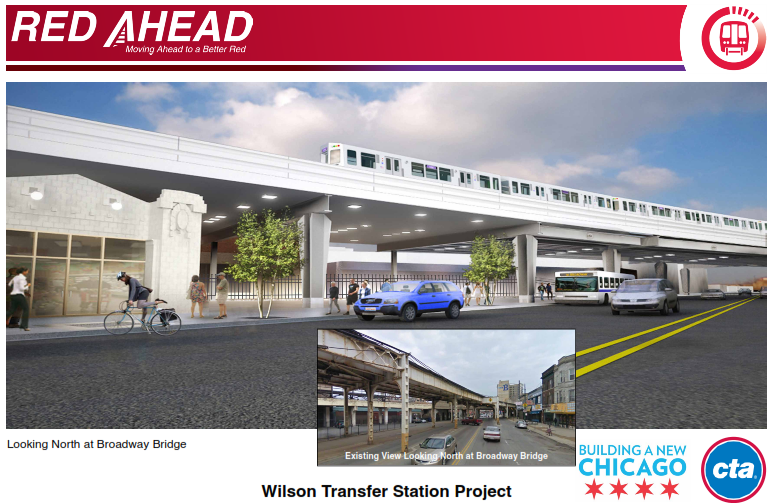 To echo Etta James, AT LAST.

Today was the ceremonial ground-breaking for the new sorely-needed Wilson L station. We've heard promises for improvements and renovations over and over for the past 20 or 30 years (from everyone from State Rep. Larry McKeon to then-CTA President Ron Huberman). It's finally happening.  No collapsed ceilings, no "Crust Station" awards, finally a station that can accommodate our community's elderly and handicapped because it will be ADA-compliant.

There was a press conference at 1:30 today inside the main (Gerber) building, featuring CTA Chairman Terry Peterson, CTA President Forrest Claypool, 46th Ward Alderman James Cappleman, and Mayor Rahm Emanuel.  You can see a video of the whole thing here, but here are some of the points made by each speaker:

CTA Chairman Terry Peterson:
CTA President Forrest Claypool:
46th Ward Ald. James Cappleman:
Mayor Rahm Emanuel:
You can read the entire press release put out by the city, and see drawings of what the station will look like.  Some of what to expect:


The new Wilson Station will feature contemporary architecture, including steel-framed, translucent canopies and a historic restoration of the 1923 stationhouse. There will be three entrance/exits to the station, including the accessible main station entrance on the south side of Wilson Avenue, one auxiliary entry/exit on the north side of Wilson Avenue and an auxiliary entrance on Sunnyside Avenue, which will have ADA-compliant ramps.

The station will feature two island platforms to allow convenient cross-platform transfers between Red Line and Purple Line Express service – making Wilson the only transfer station between the Howard and Belmont stations.

Additional features and amenities of the station to enhance customer convenience and comfort will include numerous security cameras throughout the station and platforms, CTA Train Tracker displays, wider stairwells, new escalators, security cameras, additional bike parking and other improvements.

The track structure relocation and reconstruction will significantly improve the pedestrian environment on Broadway and Wilson by removing many of the unsightly and ‘L’ structure support columns on Wilson Avenue, Broadway Street and surrounding sidewalks, creating a more pleasant, open streetscape. The project is also expected to generate new transit-oriented business development.

Additionally, the new station will feature new public artwork from internationally acclaimed artist Cecil Balmond. The design will be created with input from the community surrounding the Wilson Station and installed once construction is complete.

To sum up, we are so happy to see long-promised improvements happen.  To quote the Mayor, "Let's get started, and let's get finished!"
By Kate Uptown - December 08, 2014