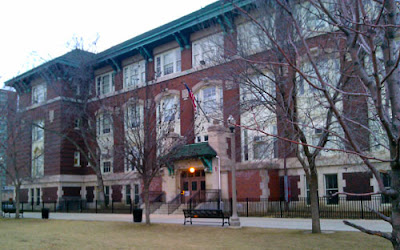 In an article entitled Decatur Parents Want to Expand into Stewart Building, the Sun-Times explores the question of what will happen to the building that formerly housed Graeme Stewart School, located at 4525 North Kenmore.  At community meetings held by the neutral Metropolitan Planning Commission last May, the conclusions that were reached included:
Now Decatur School, a top public school, would like to move into the empty building, but -- this being Uptown -- there are objections being raised. One of them is that it's somehow unfair to Uptowners if Wilson Yard TIF funds are used for the move.

We all know that TIFs siphon off money from public schools (among other entities).  Because of that, we don't see a problem with TIF money going back to a public school, particularly one that's right across the street from the very TIF project that has and will continue to suck hundreds of thousands of dollars away from CPS for years to come. But, the Sun-Times reveals, TIF money isn't even an issue:


[C]onfirmation from the Uptown alderman that no local tax-increment financing money will be used to pay for the proposed expansion of a selective, test-in school defused some of the criticism. [...]

“The confusion is that people saw there was money available in the TIF, and there is. The problem though is that money is being used to pay off past projects like the Truman College Garage,” [Ald. James Cappleman] said. “I want this to work. But it can’t be done using TIF funds that don’t exist.”

Ultimately, the decision on whether to allow Decatur to expand to include 7th and 8th grades, and to move to Uptown from Rogers Park, lies with the CPS Board. And we all remember from a year and a half ago how well they listen to public opinion.

We'd love to see the number one public school in Illinois be right here in Uptown.  But for now, like everyone else, we just have to stay tuned and see what Barbara Byrd-Bennett and her crew decide.
By Kate Uptown - November 27, 2014