Majestic Terra Cotta From the 1920s Goes Into Storage 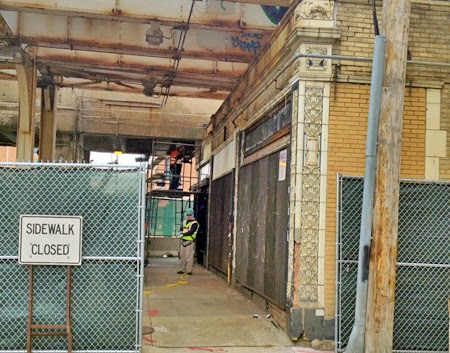 The northeast corner at Leland and Broadway is undergoing a change as part of the ongoing renovation of the Wilson Red Line station.  The sidewalks are blocked off, and the long-neglected terra cotta is being removed after being inspected by workers.

The walls of the former Majestic Building will be removed at some point, and support pillars for the new lighter train overpass over Broadway will be built where the store's interior used to be.  Then the walls will be re-erected (and so, presumably, will the terra cotta), making the building just the latest in a series of Chicago "fake buildings."

In a few years, you can ask your friends to identify Uptown's own little Potemkin Village, as well as wow them with your stories about the "live poultry" shop that used to be at this location, as well as the best place in Uptown to buy lime green mens' suits.
By Kate Uptown - November 15, 2014