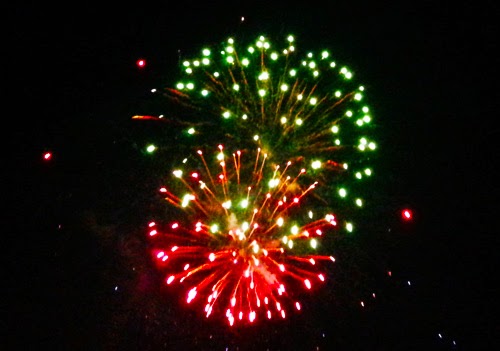 Most of us probably don't think of the Saddle and Cycle Club, located at 900 West Foster, very often. And that's exactly how they like it.  It's so private that even its website is password-protected.

But around Independence Day, the neighborhood gets to see the magnificent fireworks display the club puts on, not from the grounds of the club (of course!), but from excellent vantage points in the parks and beaches.

So for Flashback Friday (July 4th version of Throwback Thursday), a look at the Saddle and Cycle Club.

It all started in the winter of 1894-95, when the North Side Skating Club enjoyed getting together. The Tribune said in its 6/30/1895 edition, "When the spring came and the ice disappeared, the members resolved themselves into the Saddle and Cycle club and built their pretty little club-house"  on leased property along the lake, just north of Ardmore.  Back then, it was so far from the city that it was, indeed, the very definition of a "country club."

Members who had gone out for a bike ride or a horseback ride in the bracing rural air wanted a place to freshen up and rest.  Soon a dining room and sitting room were added, and Sundays out in the country became a tradition.  By 1898, the club had become so popular that it outgrew its "pretty little club-house" several times over.

The Tribune dutifully reported, "The club was able to buy and now owns a piece of property at the beginning of Edgewater.  It is on the corner [of what is now Marine Drive and Foster Avenue] and directly on the lake."  The new property's buildings were designed by noted architect Jarvis Hunt. The five acres, with 600 feet of lakefront, cost $60,000, approximately $1.65 million in today's currency. By the 1930s, it had grown to include a swimming pool, a curling hut, a pier for members' sailboats, tennis courts, and a three-hole golf course.

Chicago was growing by leaps and bounds.  Soon the club's beachfront was swallowed up by landfill, and the Outer Drive was built in 1933-34, further separating the club from the private beach it had once enjoyed.  Members complained that the addition of the Drive made the club a "gold fish bowl."  The additions of parkland and Foster Beach (all landfill) east of the Drive contributed to the distance the club found itself from the waterfront.

Over the years, Saddle and Cycle has had its braggable moments (a 1924 visit by the Prince of Wales, who later abdicated the British throne for "the woman I love") and its not-so-proud ones as well (a undercover raid by Chicago police in 1942 that netted two illegal nickel slot machines).

By 1944, the Tribune's society columnist lamented, "It was built directly on the shore of the lake and its members swam in Michigan's icy waters.  There were no skyscraping hotels nearby to remind us that the city was only a hedge-hop away. ... Now the city surrounds it the way a garrotte surrounds a doomed neck."

70 years later, the city and skyscrapers still surround the Saddle and Cycle Club, which will celebrate its 120th anniversary (!!) next year.  But non-members hardly know it's there.  It's pricey, exclusive, and secretive.

Enjoy the fireworks show tonight, which begins at dusk.  It may be as close as many of us will ever get to one of our oldest, most private neighbors.

UU Note:  We hear prime viewing areas are on the beaches (Ald. Osterman likes Kathy Osterman Beach, at 5800 LSD).  We've also enjoyed it from Margate Park.  Friends swear sitting right next to the Drive at Foster is best.  Others think that bringing lawn chairs to Foster Beach is the way to go.
By Kate Uptown - July 04, 2014