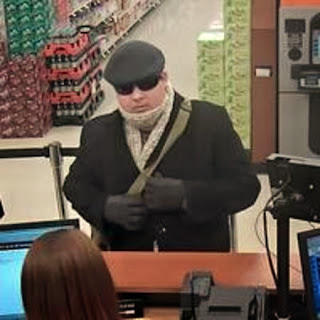 On December 12th, a reader asked: "So my roommate was just at the Jewel store on Montrose and Broadway and overheard 2 employees talking about the TCF Bank branch there being robbed earlier today. Anyone hear anything about this?"

We checked and saw several robberies at an Edgewater TCF had been recently reported, but saw nothing about the 4355 N Sheridan store.

Turns out it was robbed, and the FBI says that the man who did it -- Kevin Ross of Evanston -- had been on a one-man crime spree in Uptown, Edgewater and Evanston for the past five months.

He was shot dead by the police just four days later, on December 16th, after robbing a Chase Bank in Evanston for the second time. Since then, the FBI have linked him with bank robberies at
The biggest shock is that the Evanston police claim they have found significant evidence linking him to the murder of two brothers in their family-owned Evanston cigar store last July.

Hard to know what was going on in this guy's mind, as he had a clean record prior to this year, but one thing is clear: he won't be robbing any more TCFs in Edgewater or Uptown.  A sad, weird story.
By Kate Uptown - December 22, 2013