You can't see Challenger Park from the 1100 block of Irving Park or the 4400 block of Broadway, but the speed cameras that were recently installed at those locations have their lenses fixed on you.

If you're driving over 30mph, be prepared to see flashes of light as you pass, then to get a warning notice.  After that, get ready for a speeding ticket in the mail.

The city's new speed camera program says it exists to protect the children who play in Challenger Park, not to plunder your paycheck.  If children's safety is paramount, we think it might have been a wiser move not to turn half of the park into a parking lot, but ... oh well.  We all know why the cameras are there.

Challenger Park is only a couple blocks long and a few car lengths wide.  Many residents probably aren't even aware of its existence.  It encompasses the area between the L tracks and the back wall of Graceland Cemetery, between Buena and Montrose.

Challenger Park was originally supposed to have soccer fields, wildflowers, ice rinks, and native grasses.  Instead, it got divided in half -- one part, a parking lot leased to the Cubs for 25 years; and the other, a narrow two-block-long park with a dog-friendly area that residents work hard to improve and maintain.  To reach the park from Irving, it's necessary to walk through a two-block-long parking lot.  That's probably more dangerous for kids than a car going 33mph a couple blocks away.

The new money machines, er, speed cameras are located: (1) facing Clark at 1142 Irving Park Road (about a block west of the parking lot entrance); and (2) outside the Broadway entrance to Target, at Sunnyside, facing Montrose.  You can see them merrily flashing away at cars that exceed 30mph between the hours of 6am and 11:59pm.  (A reader points out that kids aren't exactly walking to the park at those hours.  And that the parks close at 11pm.) 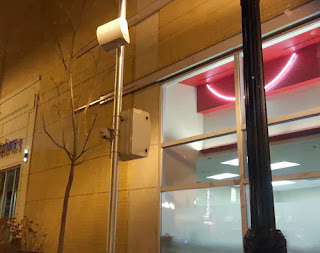 The cameras officially went active on Friday, December 6th.  This is what CDOT has to say about their trial period, and fines for cars exceeding 30mph: 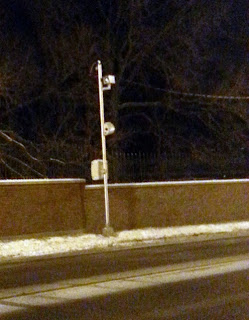 You've been warned.  Take it easy on the gas pedal on Broadway between Montrose and Sunnyside, and on Irving between Clark and the L tracks.  With apologies to Johnny Cochran:  When the cameras flash, you'll lose some cash.

UU Note:  All three of Uptown's aldermen -- James Cappleman, Ameya Pawar, and Harry Osterman -- voted "no" on the issue of speed cameras around parks and schools.  However, the measure passed through the City Council by a margin of 33-14.
By Kate Uptown - December 19, 2013