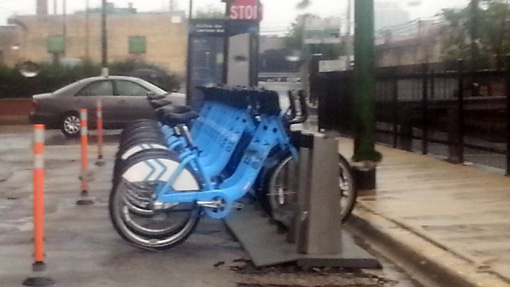 With several new Divvy stations going online this week and last, including the one above (located east of the Bridgeview Bank building, near Lawrence and Clifton), Uptown now has 11 places to rent and dock bikes.  We thought we had the northernmost stations, but one has been activated in Edgewater as well.  Check out the live map of current locations and upcoming locations here.

Update:  According to a press release sent out by Divvy, this week Chicagoans pedaled their millionth mile on Divvy bikes.  "With 240 stations on the ground to date, Divvy staff plans to install another 60 in the next few weeks, ramping up to 300 stations and 3,000 bikes.  By next spring, Divvy will be in 400 neighborhood locations with 4,000 bikes."  So look for more to go live very soon.
By Kate Uptown - September 19, 2013