Shooting Near Truman College At 8pm 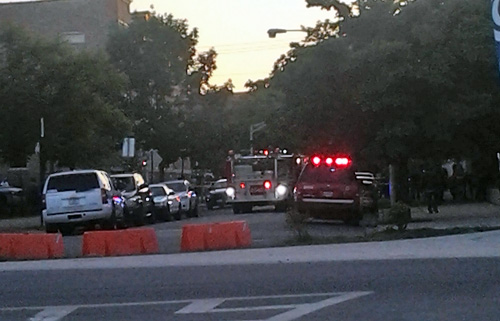 A person was shot tonight near Sunnyside and Racine, around 8pm, at the southwest corner of Truman College.

Coincidentally -- or not -- this is very near the home of Tuesday's shooting victim.

Witnesses all reported hearing 15-20 shots, a ridiculous number.  One witness says there was an "older gold compact car [UU Note: another reader believes it may have been a gold minivan] speeding wrong way down Clifton, turned into the alley before Montrose going west.  Followed by a second nondescript navy or black old compact."  Another says, "Two kids fired about 10 rounds with a semiautomatic and took off on foot. I saw a white Cadillac with a blue roof leaving the vicinity right after." [UU Note: A reader says the Caddy belongs to a security guard.]

Truman College is leaving phone and text alerts for its students, and giving the address of 1224 West Sunnyside as the site of the shooting.

We heard from multiple people that Ald. Cappleman is at the scene, and he tweeted an hour ago:  "At the scene of a serious shooting on Sunnyside between Racine & Magnolia. Appears gang-related. More details to follow."

We're not gang experts, but it seems pretty clear that this was payback for Tuesday's shooting of another gang member. This is what happens when you have gangs in a neighborhood. Payback, revenge, stupidity.  It is a very limited number of people doing this, but they sure do make a lot of noise about it, don't they?

If you have information that can help the police in their investigation, please call 911 and ask that it be relayed to the officers on the scene.

The CHA has been trying to evict the family whose son, a well-known gangbanger, was shot in the leg on Tuesday.  Perhaps the two incidents this week will inspire them to try a little harder.

Update:  From the Tribune.  "A man was shot multiple times in the Sheridan Park neighborhood tonight and left in critical condition, one of at least eight people shot today across the city, officials said.

Paramedics were called to the 1200 block of West Sunnyside Avenue at 7:56 p.m. for a person shot, according to Chicago Fire Department Chief Juan Hernandez.  They took a 25-year-old man with multiple gunshot wounds in critical condition to Advocate Illinois Masonic Medical Center, said Hernandez.

The crime scene is on Sunnyside Avenue between Racine and Magnolia. Multiple shell casings and a small pool of blood could be seen in a nearby alley."
By Kate Uptown - June 07, 2013