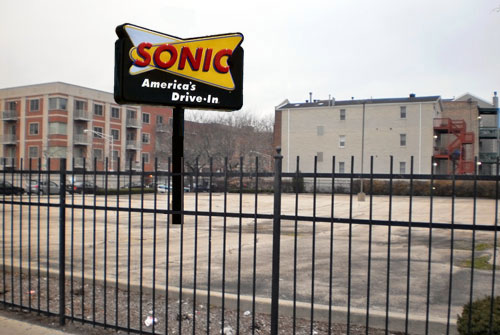 No, there's not a Sonic Drive-In sign in the empty parking lot at Kenmore and Wilson -- yet -- but there may be one there soon.

In August 2011, UU broke the story that Sonic was considering opening its first Chicago restaurant in Uptown, one of three locations it was looking at.  Then nothing happened.  We gave up on it.

Now we are hearing from a reader that it's back on, and it's looking like it's close to being a done deal.

"Hello!  I went to a meeting with a representative from Sonic, Alyssa from Uptown United, and some other Truman Square residents at the alderman's office last week.  Sonic has chosen Uptown as the location of its very first Chicago store!  It will go into the large parking lot at Kenmore and Wilson (1016 West Wilson), across the alley from McDonalds.

The representative of the franchise group, Mark Kinnare, showed us some drawings and plans.  He also answered our questions.

Why Uptown?  Uptown was chosen over other site contenders because of Target and the new Wilson L.  The first Sonic in Chicago will be a big deal and heavily promoted!  Sonic was looking for a central location where people from Lincoln Park and Rogers Park already come, and Uptown's Target is a proven draw that brings people to Uptown from all over the North Side.  The plans for the new improved Wilson L, just a block away, solidified Uptown's appeal.

Why not the old El Pollo Loco site at Wilson & Sheridan instead?  El Pollo Loco signed a long-term lease at that location that is bringing the owner a very big rent check each month, in excess of the current market rate.  The owner would lose a ton of money if he terminated his guaranteed lease with El Pollo.  Alderman Cap has tried to get him to budge and rent to another business at that corner, but he is not willing to break his very lucrative lease with El Pollo, and I can't say I blame him.  Unless he has a change of heart, he will wait for the lease to run out before anything new can go there.

What about zoning?  The lot at Kenmore is already zoned for a business like Sonic, so no zoning change or approval is needed.  The drive-through will require a special use permit.  They will also need to get approval from CDOT for the entry and exit curb cuts onto Wilson.  That's something that changed from the plans presented last year, which had an entrance/exit onto Kenmore.  Neighbors didn't like that, so they changed it so all traffic enters and exits onto Wilson instead.

When will it happen?  The soonest it can open is August 2013, and that's if everything goes perfectly with the permits from the City of Chicago, which has been very red-tape-y lately.  It takes about 75-80 days to build a Sonic.

What about security?  They are very aware of the "challenges" Uptown presents and will have security officers on the premises at all times.  Mark specified that only experienced security personnel will be hired.  It is not a cookie-cutter Sonic store, it was designed especially for the site, and security for customers and employees was a high priority when they designed it.  I remember how safe Pollo Loco was, so I believe they will be able to achieve this if they do it right.

So, what makes this design different?  It will have an indoor/outdoor dining area in front, with a 12' canopy over the outside part.  It will be a 2700sf building, and the bathrooms will be inside rather than outside, as in a regular Sonic layout.  Most Sonics rely on the drive-through, but in the city, so few people have cars that this one will concentrate much more on pedestrian traffic.  There will be a double drive-through because that's what people expect these days, but the store will be much more focused on carry-out and eat-in orders than the usual Sonics.  It will have a six-foot stockade fence on the north and east sides of the lot, a wrought-iron fence on the south and west sides, and 10-12 drive-up stalls.  There will be a bike rack, many trash cans, and a lot of landscaping, particularly on the north side of the lot, to help keep noise down.

Speaking of noise....  The Sonic will be competing directly with McDonalds, so it will probably have the same hours:  Dining area open until around 10pm, with a 24-hour drive-through.  The drive-up stalls, served by carhops, will be on the east side of the building.  They will turn off Sonic Radio, that plays through the stalls' speakers, at 10pm or 11pm, to avoid bothering the neighbors.  Mark said they have angled the speakers in the drive-through away from the buildings to minimize noise, as well as putting in fences and foliage to help keep it away from the homes.  I asked if the drive-through speakers could be moved to another part of the lot, farther from people's homes, and closer to Wilson or the alley, and he said no, but that he would be willing to discuss with the community ways to keep it quieter, and is open to a sound study.  He stressed that Sonic believes in working with the neighbors, because the neighbors are their best customers.

What about jobs?  Sonic puts a high priority on local hiring, and expects to hire about 90% of the workers from Uptown.  Mark expects about 100 workers will be hired to start, with all the promotion that Sonic will put into the first Chicago store.  After a while, it will level off to about 65-70 employees.

Local advantages?  The last time the lot was used for anything was way back in 1980.  It hasn't produced any sales taxes for more than 30 years.  The new Sonic will put a lot of money into the tax rolls and bring people to Uptown who may not have been here before.

Mark said in email later:  Please let the community know how excited we are to be building the first Chicago Sonic in Uptown.  We'll get through winter and permitting, and hopefully be in the ground building the newest Sonic before we know it!

There will be a meeting for people living in Truman Square (since they are the ones who will be most affected by the new store) to ask questions about the project, see the plans, voice their concerns, etc., on Monday, January 14th, time and place TBA.  Please check Truman Square Neighbors Facebook page for more details as we get closer to the date."


Update:  RedEye Chicago has a little more information about Sonic.  So does Huffington Post, which credits UU for the info (always appreciated!)
By Caring Neighbor - December 15, 2012