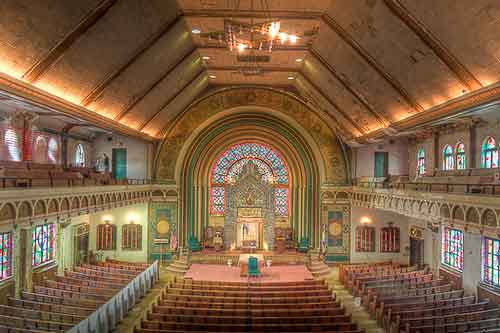 In what had to be a gut-wrenching decision for its caretakers, this week Agudas Achim Synagogue, located at 5029 N Kenmore, was put up for sale.  It was built in 1922, during Uptown's gilded age, and cost $400,000 to build -- $5.5 million in today's dollars.  It has been described as "the last grand Chicago synagogue."

But what was built by Chicago's wealthiest in the 1920s became the place of worship for Chicago's poorest by the 1970s.  The building has fallen into terrible disrepair because the elderly, mostly Russian-immigrant, worshipers simply never had the money to maintain it.

Agudas Achim has also been frequently robbed and vandalized over the years. In February 2006, community members and neighbors gathered in the main sanctuary for a service of unity and brotherhood, and we shivered because there was no heat because there was no money to pay for it.  After the service, neighbors and congregation members stood side by side and painted over swastikas and anti-Semitic slogans that had been painted on the walls by vandals, who had also ransacked the building.  The synagogue has sat empty for the past few years.

It should be remembered that Agudas Achim could have made the decision to have Big Chicks/Tweet closed down when a city inspector discovered the restaurant was too close to a place of worship to have a liquor license.  But the rabbi and the congregation made the decision not to object, special bills were written to allow a variance, and Big Chicks and Tweet are still carrying on strong.

You can read a history of Agudas Achim and take a virtual tour of the building here.  The real estate listing is here, and it includes this heartbreaking phrase:  "Potential for condo conversion or new construction."
By Caring Neighbor - September 12, 2012