Maryville One Of The "Chicago Seven" 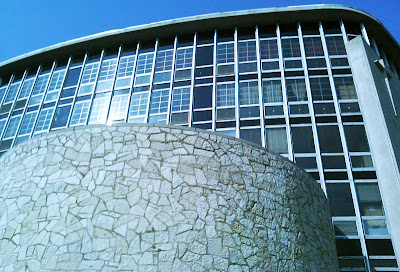 According to the Tribune's Blair Kamin:

"Three Chicago hospitals and a cluster of aging movie theaters top a list of endangered historic properties released Wednesday by a Chicago preservation advocacy group. The group, Preservation Chicago, each year announces its "Chicago Seven" list to draw attention to the plight of historic buildings and encourage property owners, city officials and citizens groups to save and reuse them."

Among them is an old friend -- Maryville (under its birth name).  "Cuneo Hospital, 720 W. Montrose Ave., an idiosyncratic modern design from 1957 by Edo Belli. Community opposition has thwarted the construction of a large-scale mixed-use complex that would have destroyed the vacant hospital, but the building's proximity to the lakefront still makes it a possible site for redevelopment and demolition, Preservation Chicago said." 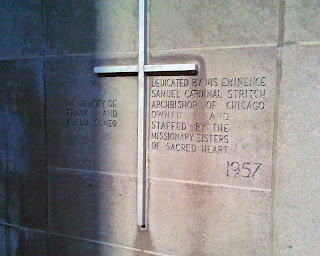 As a reader points out:  "Preservation Chicago gives the tacit impression that we resisted the development there because we are enamored with the 1957 (?) Edo Belli-designed “Cuneo Hospital”.  I don’t recall ever seeing what the original purpose of the building was until now…not that it makes me any more “enamored” of the building."

UU Note:  Here is the dedication of the building:  "In Memory of Frank and Amelia Cuneo."  The Cuneos were wealthy Uptowners from about 100 years ago who founded the South Water Market, the Cuneo Press, and were benefactors to their community.  Here is a photo of the hospital's opening blessing, from the Uptown Chicago History blog.
By Caring Neighbor - April 05, 2012