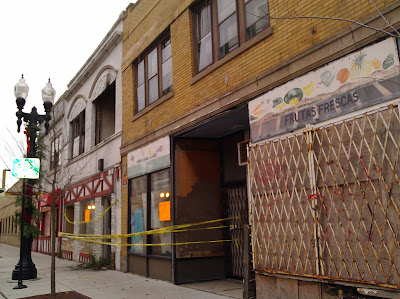 Last Thanksgiving, the row of storefronts at 4415-4423 N Clark were taped off after what appeared to be a fire and were declared "Off Limits" by the City of Chicago.  For those keeping score, they are the former homes of Pete's Upholstery, Little Quiapo restaurant, and a fruiteria. 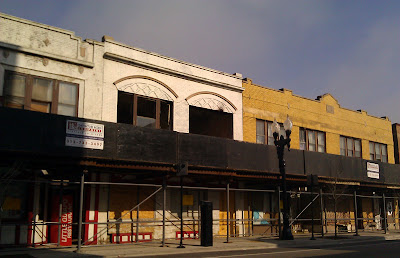 A week or so ago, they were still boarded up and scaffolding had been put into place. 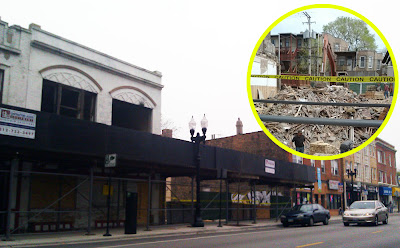 Today, the demolition process is underway.  The southernmost yellow brick building is rubble, and we don't hold out a lot of hope for the two buildings that are still standing.  A commenter on UU's Facebook page says the project foreman told her the site will become a parking lot, at least for the time being.  Another commenter/historian says:  "The middle one, 4421, with the brick arches, was the oldest, 1911. The wider one on the south was from the late 1920s."

We have to wonder if Jackie Taylor's ambitious plans for expansion around the Black Ensemble Theater Cultural Center, just down the block, may play a part in their fate as time goes on?
By Caring Neighbor - April 01, 2012