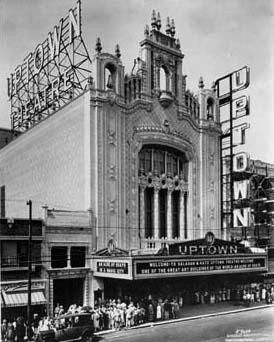 Several readers who attended Saturday's performance by Lakeside Pride Symphonic Band at the Preston Bradley Center contacted Uptown Update to let us know that Alderman James Cappleman provided an update on the plans for the Uptown Theater.  Alderman Cappleman, who served as the emcee for the concert (fittingly, the theme was Salute to Uptown), announced to the three-hundred-plus people in attendance that he was working closely with Mayor Rahm Emanuel to see the rebirth of the Uptown Entertainment District with a complete renovation of the Uptown Theater.  He said that he expects all of the financing to be in place by the end of 2013, at which time the renovation and restoration would begin.  Cappleman said that the total project cost is $63 million, and that the entire project would be expedited to be finished in two years.

Translation: By the end of 2015, if all goes as planned, the Uptown Theater would be restored to its former glory once again. Combined with a rebuilt Wilson CTA station, the next three years should be transformational for our neighborhood.

We are awaiting further details on the monumental announcement.
By Cub Reporter - March 26, 2012