Another Chapter For The "Sam Alexander Building"? Ah, slumlords.  The beautiful vintage building at 1001-1017 W Leland (just west of Sheridan), aka "the building with the faces" or the "Sam Alexander Building," has suffered greatly over the last decade due to an owner who neglected it so much that the building ended up in housing court for more than six years.

Four years ago, all tenants left due to the blight the landlord's inactions had caused:  unsanitary conditions (tarps tacked up on retail tenants' ceilings to stop rainwater from flooding the place) and shoddy repairs (windows that were glued into place and blew out onto the sidewalks during a windstorm).  Two years ago, the bank foreclosed on the owner's corporation. 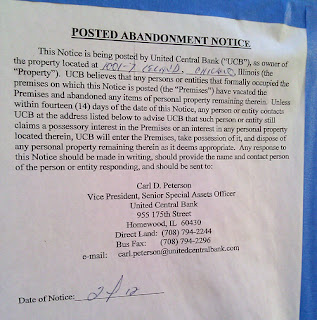 Now it looks like the building itself has a new owner.  At least that what we gather from "Notice of Abandonment" posted on the doors of the building by a Homewood bank, calling for anyone who may have left items inside to retrieve them.

What's next for the building?  We don't know.  We hope it's still salvageable and that the previous negligent owner didn't do enough damage to ruin this Uptown classic.