At least three guns, including a rifle with a scope, and a bulletproof vest were found after a nearly six-hour standoff that shut down part of the CTA Red Line, officials said.

The standoff began Monday night as investigators sought to question four men about a slaying in South Bend, Ind. [...] Police recovered a .40-caliber handgun, a .45-caliber handgun, a 223 rifle with a scope and a bulletproof vest [...].

Authorities said the men had been sought by South Bend police for questioning about the fatal shooting of a 31-year-old man on Nov. 18.  Deitrich Perkins was shot while sitting in his car and then tried to flee but collapsed in a nearby lot.  You can read the entire article here. 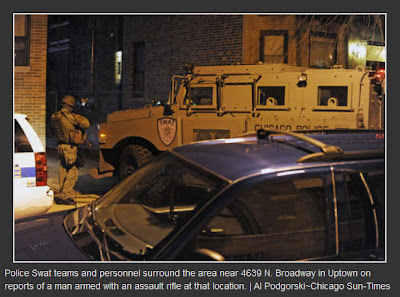 If you want to sign up for CTA service alerts, just in case, you can go to the CTA website.

It was a rough night.   (Just sayin', "sharpshooters on the roof" is something we'll leave out of this year's Christmas letter; and we're so happy that WGN superstation led off its nationwide 9:00 news, which many of our out-of-area friends and relatives watch, with live coverage of the barricade story.)

Now that we have a little more insight into what was going on inside 4639 N Broadway -- three armed, wanted men barricaded inside, possibly including one charged with murder -- we're even more grateful that it didn't end the way we feared it would, with loss of life.  We hope we, and Uptown, never have to experience anything like it again.
By Caring Neighbor - December 08, 2011