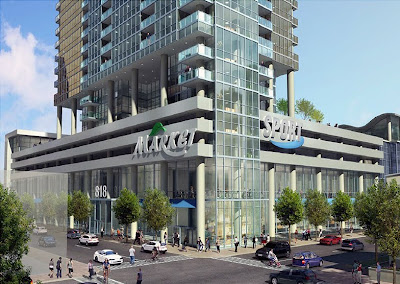 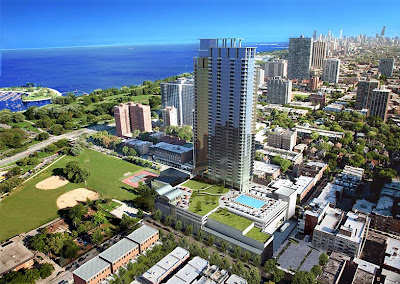 A sharp-eyed reader sent us a link to the SkyscraperPage forum, which posted pictures of the revised Sedgwick Properties planned development for the northeast cormer of Montrose and Clarendon. Few details other than the two photographs are known, other than the development is "now only a single apartment tower (about 500' tall) with a Mariano's and XSport plus townhomes for a total of 620 units."

What are your thoughts on this revised plan for the eyesore known as Maryville? It appears that Sedgwick made many changes to the plan, including eliminating one of the high-rise towers. To refresh your memory, here is a link to the previous plans.

Update:  The new project is no longer "Lake View Station" and is apparently called "Lighthouse at Montrose Harbor."  Sedgwick's consulting firm is writing to block club presidents in the ward and asking them for meetings and feedback, at the suggestion of Ald. Cappleman.
By Cub Reporter - November 07, 2011