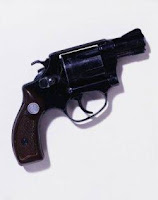 Interesting.  A reader sent this in, having seen it in Gov. Quinn's recent newsletter.  Since so many of the gangbangers are convicted felons, do you think it will have any effect on their behavior?  Or at least get them off our streets for longer periods of time?


"Fighting Gun Violence. On August 2, Governor Quinn signed Senate Bill 1589 into law, which is aimed at reducing gun violence in Illinois.  Felons convicted of new weapons offenses will be sent to prison for two to ten years and cannot be sentenced to probation.  Additional violations may increase the sentencing for three to fourteen years. The defendant must be previously convicted of a felony.  The bill came about following the death of Chicago Police Officer and Iraq War veteran, Thomas Wortham, who was shot outside of his family home by suspects who had previously been convicted of gun charges.  The law takes effect January 1, 2012."
By Caring Neighbor - September 01, 2011