Man Shot Near Sheridan and Windsor 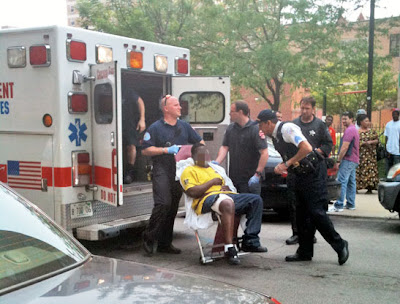 Our Facebook page is buzzing with accounts of six shots fired around 10:50am.  Due to the high concentration of street cops in Uptown this week, police were on the scene before many residents could call 911.

"Shooting at 4535 North Sheridan Road, on a Black Ford Taurus. One person shot in the leg and back. Suspect is Byron Daugherty. 914 Leland is another address being mentioned over scanner."

"Four young men in custody just behind Uplift. Cops searching for gun on Leland between Uplift and Sheridan. Definite injuries as ambulance is on the scene of the shooting."

"6 shots that sounded like they could've been construction work happened this morning before 11 am. They  occurred shortly after a woman walked into the building with her baby. The post office lady had just been in the building as well.  The man shot lives in the building, was shot in the hallway and has a daughter who lives down the street."

Update:  Rumor has it that the shooting was a domestic, over a custody fight.  At positive loitering tonight, Cmdr Boehmer said that both the victim and the suspect in custody are gang members, and the police think that the shooting this morning was retaliation for the Gunnison shooting last Friday (expected by the police, which is why so many of them have been on our streets recently).  The gun has also been recovered.  Nice work, officers!