Magic Johnson Bows Out Of Uptown (But Leaves His Mark) 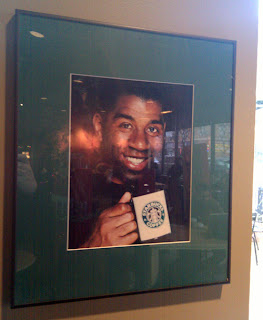 Back in late December 1999, Starbucks opened at Magnolia and Wilson.  It was a joint venture between Starbucks and (Magic) Johnson Development Corporation, an experiment that began in 1998.  Uptown's was the very first of such collaborations in Chicago, whose number eventually grew to eight locally, and over 125 nationwide.

MJ's goal:  to "create economic activity in historically underserved ethnic communities," to create jobs for local residents, and to attract other businesses to the area.  (All this according to the company's executive vice president at the time.)

But the Magic Johnson era in Uptown is over.  Magic Johnson Enterprises recently sold all of the shares in its stores back to Starbucks, according to Crain's.

We remember Wilson Avenue pre-1999, and it was a very different place.  The Tribune described it as "the Uptown thoroughfare so notorious for its prostitutes and homeless drunks and scared foreign students dashing into Truman College for English classes."  No Magnolia Cafe.  No Jimmy John's.  No Aardvark Insurance, or 7-11, or mom-n-pop entrepreneurs putting their life savings into a business and their kids working after school and on weekends to help support the family.

So it looks like Magic Johnson's experiment, to see if a Starbucks could jump-start the retail in an underserved area, worked.  He's no longer a stakeholder, but he left his stamp on our neighborhood.  For that, we are grateful to him.
By Caring Neighbor - December 11, 2010