Not Registered To Vote?

Today voter registration reopens after a pre-Election Day moratorium.  So if you're not registered to vote, do it now and be ready for the February election, when we elect a new mayor and new aldermen.  This is going to be an historic election, and you need to be part of it. 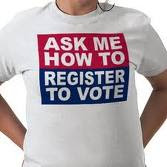 Well, suppose you moved to Uptown in 1989.  The mayor is Richard M. Daley; your alderman is Mary Ann Smith, Helen Shiller, or Gene Schulter.  Since that time, you would have seen four different U.S. Presidents serve in office.  You would have learned about this newfangled thing called the Internet.  The Berlin Wall fell.  You learned about ways to make phone calls that didn't involve land lines or pay phones.  The U.S. entered into three wars in the Middle East.  The European Union was formed.  Gas prices went from about 79 cents a gallon to close to five bucks a gallon, and everywhere in between.

You know what didn't change during that time?  It's 2010 and the mayor is Richard M. Daley; your alderman is Mary Ann Smith, Helen Shiller, or Gene Schulter.

For the first time in over 20 years, at least 75% of that equation is going to change.  Uptown is going to change.  And who gets to decide who's going to lead those changes?  You do.  Register to vote by January 24th, and get out to vote on February 22nd.  It's important.
By Caring Neighbor - November 03, 2010