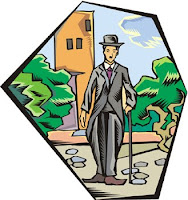 Turns out it was filmed right here in Uptown, at Essanay Studios. Read about its loss, discovery and what happens now, in the Tribune.

While Chaplin only resided in Uptown for a grand total of 23 days, in the winter of 1914-1915, his legacy still lives here. If you visit St. Augustine College on Argyle, the former site of Essanay, you'll find the Charlie Chaplin Auditorium in what was once a sound stage.

There's a great article about Essanay and its glory days online; it originally appeared in Chicago Magazine. Our favorite part was Chaplin staying at the home of Broncho Billy Anderson and his wife for Christmas 1914, at 1027 West Lawrence, roughly where Dib Sushi is now located.
By Caring Neighbor - November 26, 2009