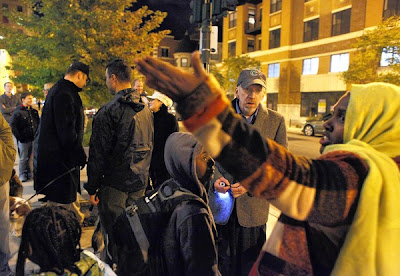 It's Friday night and despite the cold rain, a crowd forms at Leland Avenue and Sheridan Road. Just hours before, a brawl had broken out on the corner among a large group of young men, drawing police and emergency vehicles. It's at least the second time in two months that warring thugs occupied the corner, and the people of Uptown are sick of it. They're sick of the gangs and the drug dealers and the prostitutes.

Update: Garrard McClendon did a column in support of positive loitering and said it would be discussed on his CLTV show this evening. However, his parents were identified as murder victims between the time he posted the story and the time his show was to air this evening. Not sure if there was any discussion, but the story link is here.
By Caring Neighbor - October 19, 2009