Gunfire At Wilson & Broadway, And Witness Is Told "Don't Talk To The Police" 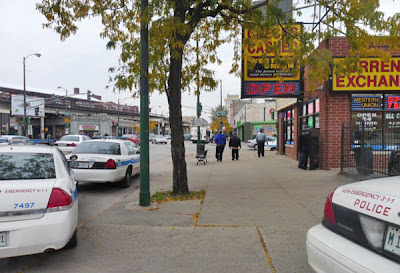 A reader was a witness and photographer today: 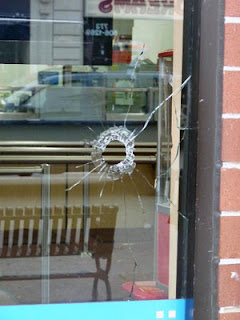 "At approximately 2:15 today, four men traveling eastbound on Wilson stopped in the middle of the street (Broadway) and started firing shots across traffic and pedestrian traffic, to apparently shoot someone near the Currency Exchange at the SE corner Wilson and Broadway. They missed, but the Currency Exchange is closed with shots fired through its heavy protective glass window.

A woman and her children had to lie on the sidewalk under the glass window to escape the shots. She initially spoke to police until a relative told her to be quiet as there may be retaliation. No one in custody. Very busy intersection with many witnesses but great fear of being seen speaking to police."

Another reader who generally has insider info writes: "At least one bullet went through the window. The only injury was someone inside the exchange being hit with glass." 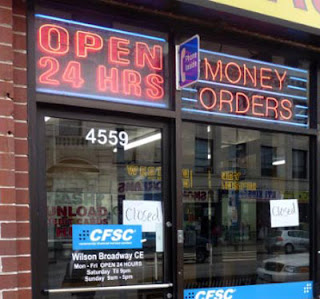 This is ridiculous - this is the fourth shooting at Wilson and Broadway in less than a year and a half. In June 2008, someone died. December 2008, an innocent bystander was shot in the back. In April, someone was hit and paralyzed. Now this. How can we get rid of the gang violence that is saturating our neighborhood?

Update: Apparently retaliation didn't take long. Yet another reader writes at 4:40 that "Reports from multiple sources to 911. Wilson and Clarendon. Four shots fired from a green Chevy Astro van at kids sitting on bleachers near the community center. Nobody hit but the van fled northbound on Clarendon. Police are heavy in their response and have notified the 20th District."

Update 2: More idiots playing Wild West on our streets: "[6:17pm] Racine and Sunnyside this time. Bunch of black kids shooting guns at other black kids behind Truman College. White hoodie with black horizontal stripes. They fled south on Clifton, then west on Montrose. 911 got about twenty calls on this one." Another reader reports the same incident: "I heard at least 5 gunshots very, very close - police were on the scene in just a couple of minutes - there were 2 squad cars coming down Malden in a matter of a few minutes."

Update 3: Read all about it, and see photos, at Lake Effect News: Bullets Over Broadway.

Update 4: Lake Effect News says the shooters at the Currency Exchange were all wearing masks. Read it here.
By Caring Neighbor - October 29, 2009