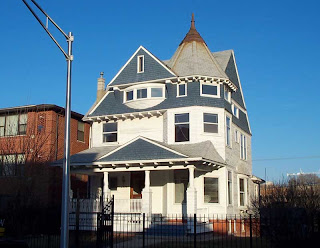 Update: The hearing is at 10am, in the City Hall Council Chambers, 2nd floor, 121 N LaSalle. Please attend if you can!

On Thursday, June 4th, there will be a zoning hearing regarding 4627 N. Beacon changing from an RS-3 to an RT-4, against community wishes.

"1. As a community in Sheridan Park, we have engaged in a long and determined process to establish a consensus of opinion that reflects the fair, sensible majority of homeowners and renters in our area.

2. While initiated by local residents, we have worked closely with both local aldermen (Ald. Shiller and Ald. Schulter) to implement this process.

3. Highpoints of the process have included:
-- Establishment of a Sheridan Park National Historic District in 1985
-- Downzoning of the community to R-3 zoning with broad support in 2000-1
-- Collection of almost 300 signatures on a petition to stop the demolition of 4627 N. Beacon—summer 2005
-- Meeting at Truman College on September 8, 2005, convened by Alderman Shiller, when more than 100 persons voted nearly unanimously to maintain the zoning at R-3 on 4627 N. Beacon and 4722 N. Malden
-- Subsequent collection of 55 signatures from “neighbors living nearest to the property” on 4600 N. Beacon opposing the upzoning from R-3 to R-4 at 4627 N. Beacon—these petitions were submitted to Alderman Shiller on September 26, 2005
-- Institution of the Dover Street Landmark District by the City Council in December 2007 encompassing approximately 80 historic homes on 4500-4700 Dover and the 4700 block of Beacon
-- Recent restatement of the community’s wishes on 4600 N. Beacon through further collection of petitions.