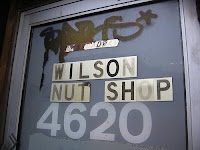 From Playbill News:
“Superior Donuts, a small-scale 2008 workplace play by Pulitzer Prize winner Tracy Letts, is expected to open for business on Broadway in fall 2009, the Chicago Tribune reported.”

“In the play, according to earlier Steppenwolf notes, "Arthur Przybyszewski (Michael McKean) owns a decrepit donut shop in the Uptown neighborhood of Chicago. Franco Wicks (Jon Michael Hill), a black teenager who is his only employee, wants to change the shop for the better. This provocative world premiere comedy, set in the heart of one of Chicago's most diverse communities, explores the challenges of embracing the past and the redemptive power of friendship.”
(photo credit: Katharine of Chicago on Flickr)
By Uptown Updater - May 13, 2009