CTA- Our Wilson Station Needs Some Of That $22.5 Million

Dear CTA,
Here are 5 simple ideas that would not cost a fortune, but would make our Wilson L station more welcoming and a lot less scary. We hope you will consider giving the Wilson station a decent portion of the $22.5 million. A lot could be done with the money. Read on for some friendly suggestions. Yours Truly, Uptown Update

1) Paint the long vacant storefront exteriors on Broadway a uniform color. As of now, we have blue, red, and brown here. Cost for paint would be less than $50. Businesses might consider moving into these storefronts (Hello, Jones Lang LaSalle) if they didn't look so shabby from the outside, actually had FOR RENT signs in the windows, and were being actively marketed. 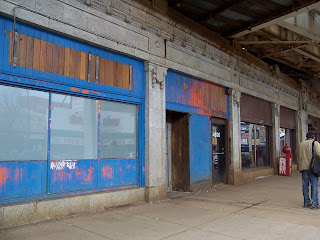 2) Give the station a total scrubdown from top to bottom. Years of rust and gunk have built up and are destroying much of the architectural detail (see below). We know you can do it! We've seen the Howard Street station that has the exact same detail (also designed by Wilson L architect Arthur Gerber) return to its original glory! 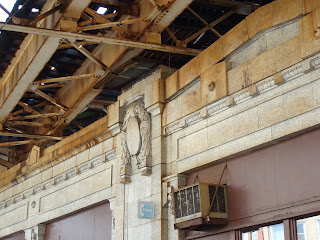 3) Force your tenants in the "Wilson Broadway Mall" to remove their blighted signage from the northernmost point of the station. It's an eyesore (below). Their painted plywood signage on Wilson is also in bad shape. A simple awning could be installed to match other businesses on Wilson and the exterior that was painted neon blue (gasp) could be stripped back to its original color. 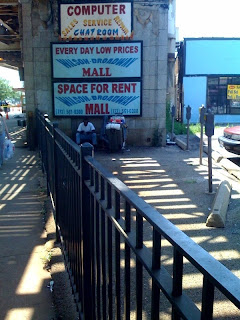 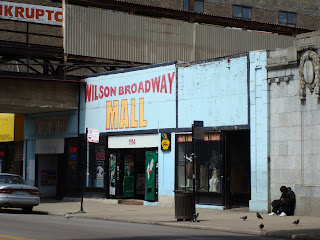 Add the same globe lighting you used at the Howard Street station to the exterior of the Wilson station. The old lighting sockets are still in place around the outside of the building (left). How much would it cost to rewire them and add lights? Lord knows more lighting is needed here and it would GREATLY enhance the exterior's appearance. See main photo above

5) Finally, move the turnstiles from the second floor down to the first floor (like every other Red Line station on the northside). This would cut down on loitering and crime in the lobby of the station and put an extra set of eyes on the street, namely the CTA attendant's. 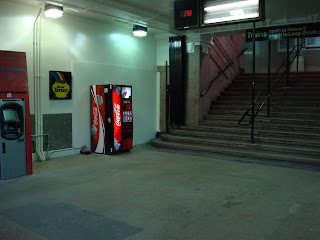 If our readers like our suggestions for the CTA's use of the $22.5 Million earmarked for station improvements, please let the CTA know. We trust that our Uptown Chamber is contacting the CTA and actively encouraging them to make these changes to our Wilson station. We also hope that Uptown organizations like UCC and UNC will step up and put pressure on the CTA to make these long overdue changes. All Uptown block clubs should voice concern as well.